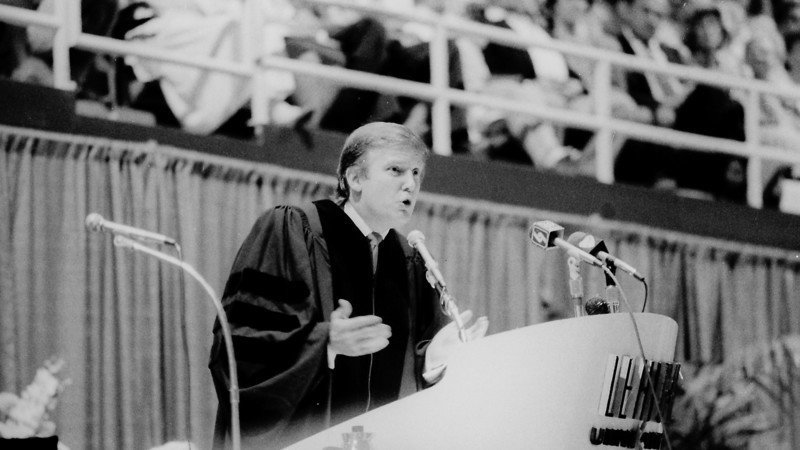 In 1988, Donald Trump was awarded an honorary degree by Lehigh University. In his commencement speech that year, it was clear he had already espoused some of the dangerous ideas he stands for today. Furthermore, Lehigh's current criteria for considering or accepting a commencement speaker's nomination states:

"This individual should reflect the goals and values of Lehigh University. Nominees should be someone whose work and achievements reflect our value system at Lehigh."

However, our current values as a university stand against everything Donald Trump represents. In 2011, Lehigh faculty and students drafted the "Principles of our Equitable Community," a document that contains guidelines for making Lehigh a more diverse and welcoming atmosphere for its students. These principles are antithetical to the behaviors and statements of Donald Trump during his presidency and on the campaign trail. Allowing Donald Trump to retain his honorary degree represents a hollow and superficial ideological commitment from Lehigh to these principles.

How does Trump stack up against these 10 principles?

1) "Lehigh University is first and foremost an educational institution, committed to developing the future leaders of our changing global society. Every member of our community has a personal responsibility to acknowledge and practice the following basic principles."

2) "We affirm the inherent dignity in all of us, and we maintain
an inclusive and equitable community."

3) "We recognize and celebrate the richness contributed to our lives by our diverse community."

4) "We promote mutual understanding among the members of our community."

5) "We confront and reject discrimination in all its forms, including that based on age, color, disability, gender identity, genetic information, marital status, national or ethnic origin, political beliefs, race, religion, sex, sexual orientation, socio-economics, veteran status, or any differences that have been excuses for misunderstanding, dissension, or hatred."

6) "We affirm academic freedom within our community and uphold our commitment to the highest standards of respect, civility, courtesy, and sensitivity toward every individual."

7) "We recognize each person’s right to think and speak as dictated by personal belief and to respectfully disagree with or counter another’s point of view."

8) "We promote open expression of our individuality and our differences
within the bounds of University policies."

9) "We acknowledge each person’s obligation to the community
of which we have chosen to be a part."
And...
10) "We take pride in building and maintaining a culture that is founded
on these principles of unity and respect."

Donald Trump does not demonstrate a willingness to respect these principles listed above. The various examples presented here just scratch the surface of his divisive and narrow-minded politics. His rejection of diversity and his lack of respect for the differences of others around him stands in direct opposition to the principles laid out here. He does not reflect Lehigh University's values. Therefore, he does not deserve to bear the distinction of an honorary degree from Lehigh. To suggest otherwise would ignore and minimize the work of Lehigh's community to promote diversity and inclusion on its campus.
(........)