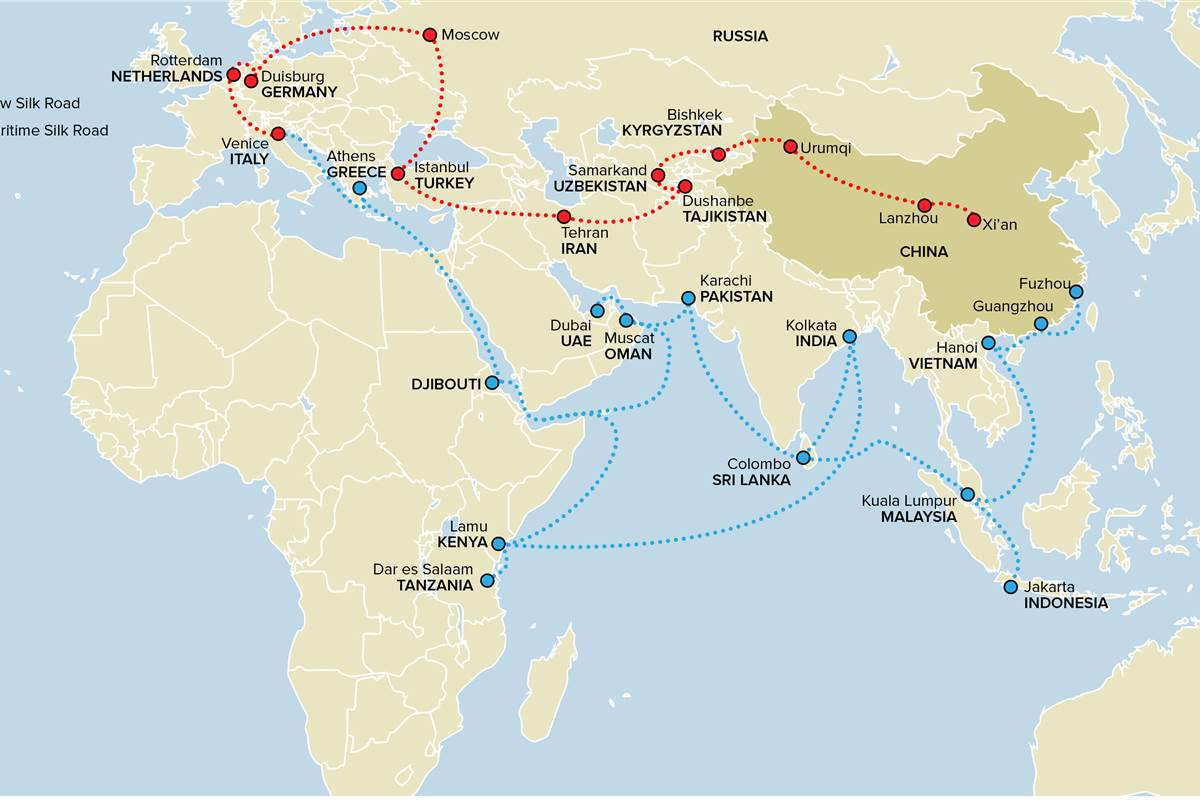 But instead of the camels and caravans that transported spices and silk hundreds of years ago, a $1.4 trillion network of modern trading routes would be built.

On Sunday, Chinese President Xi Jinping will host 28 heads of state at the opening of a two-day summit focusing on the so-called "Belt and Road" initiative.

Analysts suggest the project could shift the center of global economy and challenge the U.S.-led world order.

Beijing hopes the gathering will rally international support for the plan.

Xi's colossal program is 11 times the size of the U.S. Marshall Plan, which reconstructed Europe after World War II.

It envisions new roads, high-speed rail, power plants, pipelines, ports and airports and telecommunications links that would boost commerce between China and 60 countries in Asia, Europe, the Middle East and North Africa.

Among Xi's guests will be Russian President Vladimir Putin, as well as the leaders of Turkey, Italy, Pakistan and the Philippines. A minister from reclusive North Korea will also attend.

The U.S. delegation is led by Matt Pottinger, a special assistant to President Donald Trump and senior director for East Asia on the National Security Council. His visit to observe the summit was only announced Friday. And surrounded by heads of state, Pottinger's relatively low position raises questions about how seriously the Trump administration is taking the project.

Related: China Plans a Megacity the Size of New England

Belt and Road can "solve global woes," according to state-run Global Times newspaper.

"The ambitious plan is not empty talk," the official Xinhua News Agency declared, highlighting that China has already invested more than $50 billion in 20 countries along the routes.

He highlighted that the countries involved boast about 55 percent of global economic output, 70 percent of the world's population and an estimated 75 percent of known energy reserves.

"Americans currently conceive of power in almost exclusively military terms, which is ironic, because we claim to believe in the power of markets to shape events, and the Belt and Road Initiative relies on markets," Freeman told NBC News.

"American aloofness" is not an answer to the strategic challenge posed by the initiative, he argued.

"If we don't seize exports opportunities where they exist, the jobs will go to others, not Americans," Freeman added.

Belt and Road is still a vision, but if it's realized in a significant way, all roads in Eurasia will "lead to Beijing" in time, according to Freeman.

"China will become the center of economic gravity as it becomes the world's largest economy," he added. "The 'Belt and Road' program includes no military component, but it clearly has the potential to up-end the world's geopolitics as well as its economics."

Wang Yiwei, a professor of international relations at Renmin University, cited the example of Erik Prince, the Blackwater founder and brother of Education Secretary Betsy DeVos.

Prince's Frontier Services Group has announced two operational bases in China to provide security to the northwest and southwest corridors of the Belt and Road project.

"Regardless of the U.S. government attitude, U.S. companies will join the Belt and Road if there is money to be made," Wang told NBC News. "There is a huge market for U.S. technology, and by bringing development and stability to Afghanistan and other parts of Central Asia, which are hotbeds of terrorism, the Belt and Road will also benefit U.S. security."

With 12,500 miles, China already boasts of the longest high-speed rail network in the world — with plans to almost double it by 2025. Under Belt and Road, a total of 50,000 miles is projected.

The plan is to enable train travel from London to Beijing "in a mere two days," according to Freeman.

So what do ordinary Chinese people think of their country's most expensive foreign venture?

"I support it because it's good publicity for China, and we are not that poor anymore," said Meng Xiawu, a 30-year-old courier.

"China's infrastructure investments in other countries will eventually have good returns, and good relations will be established with these countries, so it's worth it," added Yao Yaodong, 25, who works at a venture capital firm.

"I beg to differ regarding investing in other countries, because I believe it's better to use the money for our country," Li said.

However, the country's children are being taught to embrace the "new Silk Road."

The government's Belt and Road fever has resulted in the China Daily releasing a children's bedtime story video called "The Belt and Road Initiative."

In part, it runs: "Once upon a time, several routes led from China to Central Asia to Europe. It was called the Silk Road. ... Ships traveled from China through Southeast Asia to Africa, and they'd bring things back to China like giraffes. ... China's president, Xi Jinping, proposed making new routes like the old routes. But even bigger. It's called the Belt and Road Initiative."
(......)