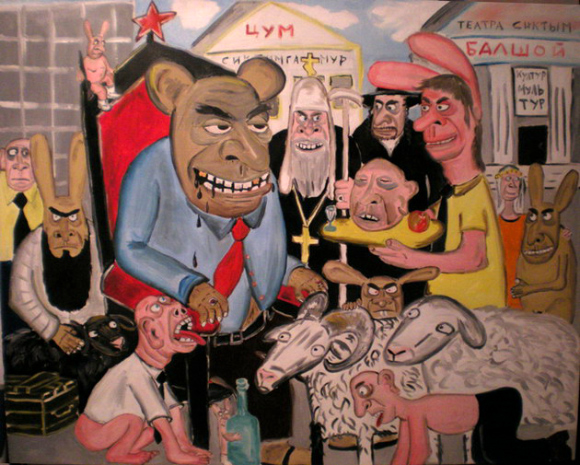 WASHINGTON, DC – Vladimir Putin’s Russia is looking more and more like the sclerotic and stagnant Soviet Union of the Leonid Brezhnev era. But in one area, Putin’s regime remains an innovator: corruption. Indeed, in this, the 18th year of Putin’s rule, a new form of crony capitalism has been taking hold.

Over the last decade, Putin has overseen a major renationalization of the Russian economy. The state sector expanded from 35% of GDP in 2005 to 70% in 2015. It would seem that, in Lenin’s words, the state had regained control of the “commanding heights” of the economy.

And yet it would also seem that state-owned firms like the energy giants Gazprom and Rosneft operate like modern businesses. After all, they have corporate-governance rules and policies, supervisory and management boards, and annual shareholders’ meetings. They undergo independent international audits, publish annual reports, and maintain boards with independent directors.

But appearances can deceive. Major state-owned companies’ rules and policies are mere formalities. They are not even really run by the state. Instead, they are controlled by a small group of cronies – former KGB officers, ministers, and senior officials in the president’s administration – who act as Putin’s personal representatives.

The system carries the hallmarks of the ancient feudal model described by Harvard’s Richard Pipes in his classic Russia under the Old Regime: it affords a maximum of freedom to the ruler, who delegates tasks to the feudal lords. In effect, Russia’s state-owned companies have transformed public property into a new model of czarist ownership.

International investors have caught on. They buy Russian stocks, but only for the sizeable dividend yields – not for shareholder influence. No surprise, then, that
Gazprom’s market capitalization has collapsed from a peak of $369 billion in May 2008 to some $55 billion today.

The operations of the so-called state corporations are particularly problematic. Legally, these firms, which include Vnesheconombank (VEB) and Russian Technologies (Rostec), are independent nongovernmental organizations. But they are established through the donation of state funds or property: when six such corporations were created in 2007, some $80 billion of assets and $36 billion of fresh state funds were transferred to them. This puts them under Putin’s direct control.

State capitalism is usually associated with publicly directed strategies for investment and technological development. And, indeed, Russia’s state corporations are supposedly focused on advancing the public interest or creating public goods.
In reality, managers do whatever they want, such as favoring friends through discretionary procurement or selling assets at submarket prices.

Loyal chief executives of Russia’s big state companies enjoy long tenures, regardless of whether they meet ordinary standards of efficiency, profit, or innovation. No CEO has destroyed more value than Gazprom’s Alexei Miller, yet he has been at the company’s helm for 16 years and counting. In 2013, Miller’s official salary totaled $25 million. Today, there is no telling what he earns, as state executives’ remuneration is no longer published.

In exchange for their outsize paychecks and ritzy fiefdoms, Putin’s lords must advance his interests – particularly when geopolitical issues emerge that threaten the regime’s survival. For example, Gazprom has obediently cut off gas flows to recalcitrant neighbors whom the Kremlin wants to punish, at major commercial cost, while supplying all of Russia, regardless of whether it gets paid. Rosneft has loaned billions to Venezuela’s state oil company – with the Venezuelan-owned US refiner Citgo as collateral – in a clear bid to exploit the country’s dire economic situation to gain access to its oil fields.

Of course, Russia’s economy is not at its strongest, either. Yet Putin’s system seems equipped to survive even the disappearance of oil rents. Putin has allowed the “systemic liberals” in his administration to impose hard budget constraints even on the large state companies. Rosneft, for example, has been forced to abandon its most value-destroying investments, such as petrochemicals. As a result, financial stability is likely to be maintained. In any case, if the oil price remains at around $50 per barrel, Russian oil rents will remain substantial.

Nonetheless, new challenges to this system are emerging – beginning with nepotism. Russia’s crony capitalism has bred a


small class of incredibly wealthy individuals, whose children are given top state positions by the time they turn 30. Unsurprisingly, this breeds resentment among the young, able, and ambitious.

For example, Petr Fradkov, the son of former Prime Minister Mikhail Fradkov, became first deputy chairman of VEB at the age of 29. Sergei Ivanov, the son of Putin’s former chief of staff of the same name, became first vice president of Gazprombank at 25 (and president of Alrosa, Russia’s state diamond company, at 36). Rosneft CEO Igor Sechin’s son Ivan became deputy director of a Rosneft department at 25.

Russia’s new model of crony capitalism seems to be a deliberate effort to emulate the success of Russia’s ancient feudal system – a system that, after all, lasted for centuries. But times have changed, along with incomes, education levels, and exposure to outside ideas. In today’s world, such a system poses a genuine threat to Russia’s social and political stability.

When opposition leader Alexei Navalny made a documentary about Prime Minister Dmitri Medvedev’s alleged corruption, more than 20 million people viewed it. Last month, tens of thousands of people in 90 Russian cities took to the streets to protest against corruption. The foundations of Putin’s neo-feudal regime, one suspects, may be cracking, even if the palace has yet to tremble.